You know, after just having published a post trashing the “diet industry” I can understand that WTF look on your face.  Didn’t I just rant about how they’re all a bunch of liars and stuff?  Yep, I did.  And so now I’m saying I’m starting a diet?  Yep, I am.  Much of the frustration in the post about the diet industry came to a head when evaluating this program.

“I have no opinion on the actual recommendations of the fans of paleolithic culture. Maybe we would be better off eating more meat or having random bursts of intense exercise; I have no idea. However, I object to the pseudo-scientific rhetoric used to support the recommendations. I also object to the implicit assumption that it would necessarily be good to emulate the lives of paleolithic humans even if we did know how they lived.”

That’s pretty much sums it up.  It *might* work.  But even if it does work I don’t think it works for the reasons they say.  The whole “caveman” part of it just pings the BS meter way too high.  It’s just annoying.  Give me hard data about the plan working and actual science as for why and I might start to be interested.
However when you ask for hard data you find out an awful truth: there isn’t a lot of completely unbiased research out there about diet.  A lot of it is funded by folks with something to prove (and money to make off of what they’re proving). For example on the website for the “official” Paleo Diet book there is a published research section – and from what it looks like the author of the book is one of the investigators on all of the published research listed.  That seems kinda bogus to me.
I don’t want imply that I specifically hate the Paleo diet or whatever – it just happens that since I’ve had someone evangelizing it to me I’ve been researching it and debating it with him.  And he’s got a lot of anecdotal reports of people that it is working for.  However anecdotal reports are just that…anecdotal. But this criticism can apply to many diets – just take a look at all the pro- and anti-Atkins data out there. One study will say it’s the best diet ever.  Another will say it’s crap.
This all ends up providing nothing but frustration.  I am VERY reluctant to trust someone when it comes to weight loss.  I’ve tried too many things and had them fail to believe folks at this point.  I’ve spent a lot of money.  It just angers me a lot because I see my health being toyed with to make someone money
.  I see my fellow fat folks being put on reality shows for the amusement of America.  (Given a chance I would love to do cardio boxing with Jillian Michaels so that I could “accidentally” punch her in the face a few times.)  I’m an angry fat man that’s tired of being lied to.
Oh, by the way, there’s a third camp.  Bariatric surgeons will tell you, to your face, that the only long term proven solution for weight loss is bariatric surgery.  The only thing that will fix you is chopping your guts up.  I’m not saying that it doesn’t work for some, but the way it’s currently being marketed is worse than anything I’ve ranted about here.  But since I’ve dismissed it as an option I’m not really focusing on it.  I told my doctor I’d rather die fat than spend the rest of my life worrying about malnutrition.

Back in April of 2010 or so I began to develop an interest in one of the geekiest of geek hobbies – amateur radio.  I went out and got some books and did some studying and took a couple of tests and got an amateur radio license.

My first radio was the Yaesu VX-8DR. 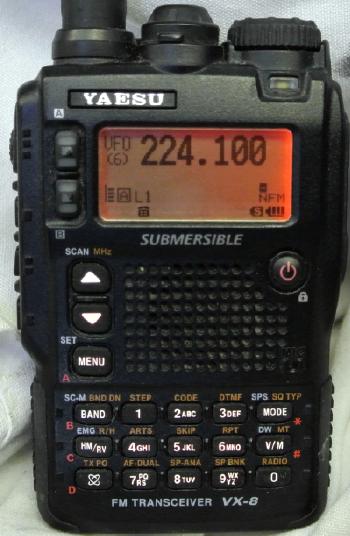 It’s fairly small, rugged, waterproof, and does APRS. It looks military.  It makes me feel cool.  I R taktikul.  Yeah.
Shorly after that I was going to local club meetings and I won a Yaesu FT-1900R.  That was pretty cool to win.  It may be very basic but it *is* a 55W 2M rig – and most of the stuff around here is on 2M.  Yay me.
Of course it didn’t stop there.  It never does.
Next I decided I needed an HF right.  And when Metaweb got bought by Google I took *some* of the money and decided to buy toys.  (The rest was used Responsibly.)  So I bought myself an ICOM IC-7000. Perhaps the most functional and certainly the most bling mobile HF rig out there.  It has a color screen!  I pair that up with a Buddipole and I can go operate from a lot of places.
Of course it hasn’t really stopped there.  I wanted a better mobile/APRS rig for the car, and I so also got myself a Kenwood TM-D710A.

It’s basically the super-duper 2M/70cm rig.  It will do all of the APRS functions that my Yaesu does, plus it lets me use the built-in TNC for packet radio if I want to.
Dammit, I need cheaper hobbies….